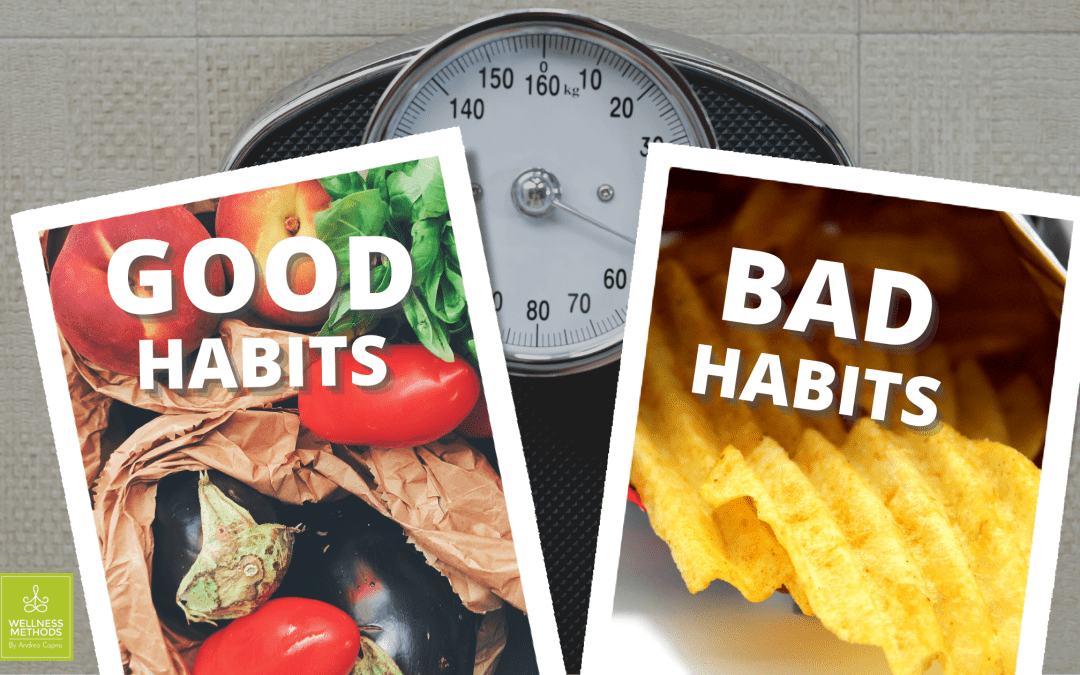 Habits are hard to change, but there are easy ways that you can cut calories and eliminate some bad habits. Remember, small habit changes add up over time, so don’t underestimate their effect when it comes to your weight loss journey.

Many of us want to lose weight but don’t know where to start when it comes to changing our habits. Small changes can make a big difference so here are some good habits and bad habits for weight loss:

Eating breakfast is one of the best things you can do if you want to lose weight. Numerous studies show that people who eat a healthy, high-protein breakfast tend to weigh less than those who don’t.

So start your day with a hearty, healthy meal and you’ll be off to a great start in your weight-loss efforts. check out my easy-to-do breakfast smoothie here.

On the other hand, skipping breakfast is probably one of the worst things you can do if you’re trying to lose weight. That first meal jump-starts your metabolism and gets you burning calories earlier in the day. If you skip it, you won’t have that calorie-burning boost for the rest of the day.

Bad habit #2: Use food as a reward or comfort.

Eating a diet rich in whole foods is the best way to get the nutrition you need and keep your body running smoothly. Avoid foods with added sugar, salt, and fat. Instead, focus on vegetables, fruit, lean protein, whole grains, and healthy fats.

We’ve all been conditioned to associate certain events with eating — especially negative emotions such as stress, boredom, or anger. But this is one of the worst habits you can have when trying to lose weight. Instead of eating when you’re upset or stressed, try to identify other ways to soothe yourself like, yoga, a spa day, or buying a new book.

Bad habit #3: Spend too much time sitting in front of the TV or computer.

To lose weight and keep it off, you need to add physical activity to your daily routine. There are many ways to do this, such as walking, biking, or swimming.

Alternatively, A recent study found that the more time people spent sitting, the more likely they were to die early. So standing up and moving around is important to your health, even if you’re not trying to lose weight.

Bad habit #4: Go to bed late, wake up late, or get up and get going early without sleeping enough.

A good habit is to get enough sleep.  Getting enough sleep will help you feel more alert and less tired during the day, as well as happier and less stressed. And while it may seem like a lot of effort to go to bed early, your body will thank you in the long run.

Studies have shown that those who got less than the recommended seven to eight hours of sleep a night were more likely to gain weight. Other research has shown that sleep deprivation can lead to increased appetite and food cravings.

I know it’s hard to give up a few favorite foods, but it’s important to keep in mind that these “white” processed foods are typically loaded with calories and have little nutritional value. So try to avoid them as much as possible.

Another bad habit is saying, “I can’t live without ____!” Replace this with a more moderate statement like, “I can choose ____ sometimes but I don’t need to eat ____ every day or all at once.” And then try to stick with the more moderate choice the next time you’re faced with that decision.

Hopefully, this list of ten habits will help you knock off some bad patterns and strengthen some positive ones that will directly aid you in your weight loss goals.

All in all, weight loss is about many different things. It’s about long-term dieting. It’s about not letting your mind control you, and it’s about keeping up your willpower until the end, or at least until you reach your goals. You can’t just depend on luck, quick fixes, or magic machines to help you lose weight in the long run. All that said, there are certain good habits and bad habits that will help you achieve your goals more quickly—and don’t forget to reward yourself!

...and get a little surprise from me